The Last Enemy: Wrestling with the reality of death

Death casts its shadow over every moment of our lives. As the years pass, we will encounter it again and again as we grieve the loss of those we love. One day, we must face death ourselves. Yet many people rarely give death a moment's thought.

These three talks were given at the 2013 Emmanuel Conference, The Last Enemy: Wrestling with the Reality of Death.

1. The Shadow of Death: Exploring the experience of death
David Field explores the experience of death, seeking to understand from a biblical perspective what it is like to encounter death first-hand. According to Scripture, how might death feel? How can we prepare for our own death and the death of those we love?

2. People of Dust: The biblical doctrine of death
Steve Jeffery addresses what the Bible teaches about death itself. What exactly happens when we die? Why do Christians still die, if we are redeemed through the death of Christ in our place? Does death have any good place in God's purposes for the world?

3. Yet Shall They Live: Christian faithfulness in a world of death
Steve Hayhow considers how the reality of death should affect our approach to the rest of our lives. How can we face the errors of the secular world – ignoring death, becoming obsessed with death, or seeking to avoid death at all costs? What practical steps can we take to live wisely in the light of death?

In addition to these three talks, Professor Rob George led an interactive discussion about issues related to palliative care. Unfortunately it was not possible to record this session.

What do you think of Jonah’s prayer from inside the fish (Jonah 2)? Is it a genuine expression of repentance and trust in the LORD? Many think so, but I’m not so sure.

At first glance, it seems to be a thoroughly godly prayer. To begin with, it’s a biblical prayer. From beginning to end, it’s stuffed full of quotations from the Psalms, and if there’s one place to begin (and continue) learning how to pray, it’s the songbook of the King.

Beyond this, it’s doctrinally orthodox. Ever the good Calvinist, Jonah knows that the LORD alone is sovereign, and he alone can save: “Salvation belongs to the LORD!” (v. 9).

Moreover, it’s full of hope. It’s hard to imagine a messier and more hopeless predicament, but Jonah’s prayer reflects the confidence that God can save him from even this desperate situation. He knows that the LORD hears his prayers: “my prayer came to you, into your holy temple” (v. 7). And he knows that the LORD never ignores the prayers of his people: “I called out to the LORD ... and he answered me; ... I cried, and you heard my voice” (v. 2).

Finally, this is surely the right kind of prayer for Jonah’s situation. It’s a prayer for mercy. And God answers it – proof, surely, that he has heard the cries of his prophet.

However, there are a more than a few hints here and there that all may not be well in the prophet’s prayer-life. This superficial veneer of liturgical respectability might be masking some significant problems in Jonah’s heart.

Jonah’s prayer is remarkably me-centred. More than twenty times in eight verses, Jonah says I, me, or my. More than once in the Hebrew text, the “I” is just a little too emphatic for comfort (vv. 4, 9). Is there not a touch of overconfidence in the assured declaration, “I with the voice of thanksgiving will sacrifice to you; what I have vowed I will pay” (v. 9)? At what point does confidence in God’s goodness become presumptuousness upon his grace?

Moreover, Jonah’s prayer is provoked by sorrow, not by sin. Indeed, he doesn’t even hint at the possibility that he might have done anything wrong to land himself in this mess. We’ve already seen enough of Jonah in the previous chapter to know that all is not right with his sense of prophetic vocation, but Jonah insists that he has already “called out to the LORD” (2:2), whereas chapter 1 records no such thing. On the contrary, Jonah is the only one on the boat who doesn’t pray during the storm, and even when the captain explicitly urges Jonah to “call out to your God,” the prophet remains silent. It’s fine to cry out to the LORD in times of trouble, but a little confession of sin wouldn’t go amiss.

This self-centred prayer is full of self-pity, the worst kind of sorrow. Jonah can only see himself as a victim, not as a responsible (and sinful) adult. As a matter of fact, Jonah wasn’t “driven away” from God’s sight; he quite deliberately “rose to flee” from the LORD (1:3; 2:4). No one “drove” Jonah anywhere. He just disobeyed God’s word and landed himself in a jam. His insistence that “your waves and your billows passed over me” (2:3) now starts to sound like the sort of blame-game played by self-proclaimed victims the world over.

Though Jonah’s prayer quotes the Psalms at length, it’s interesting to look more closely at the Psalms he selects, and to consider their original contexts. The list of quotations and allusions is impressive – it includes Psalm 3:8; 31:6, 22; 42:7; 69:1; 88:6-7; 118:5 and 120:1. However, in every single one of these examples, the Psalmist is suffering because his enemies are oppressing him. These are the songs of a faithful witness to the LORD’s saving work who has been rejected by the nations and even his own people. But Jonah has suffered no such rejection. The Pagan sailors tried to save his life, only reluctantly throwing him into the sea after all else failed (1:12-13). Jonah has cast himself in the role of the righteous sufferer, but quite frankly the costume doesn’t fit.

Finally, Jonah displays a disturbingly callous attitude to the lost: “those who pay regard to vain idols forsake their hope of steadfast love” (v. 9). We might have hoped that God’s command to preach to the Ninevites would have stoked a little compassion in Jonah’s heart. After all, God had certainly not abandoned the (now-former) Pagan sailors at the end of chapter 1. By the end of the book, every Pagan we meet will have been saved, but Jonah’s fate hangs in the balance.

In summary, while Jonah’s prayer seems superficially orthodox and godly, it’s hard to escape the undertones of hypocrisy, self-centredness, self-righteousness and heartlessness that lie just under the surface. Perhaps the reaction of the fish in v. 10 says it all: Having heard what the prophet had to say, did what the Land of Canaan did to all its inhabitants, whether Pagan or Israelite, when their sin became too much to bear (Leviticus 18:25, 28; 20:22) – “it vomited Jonah out upon the dry land.”

Latest Talk
3. Yet Shall They Live - Christian faithfulness in a world of death
By Steve Hayhow 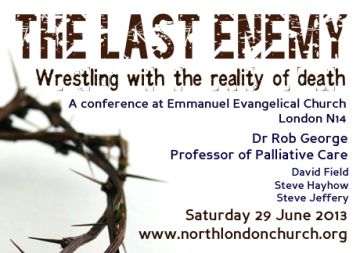